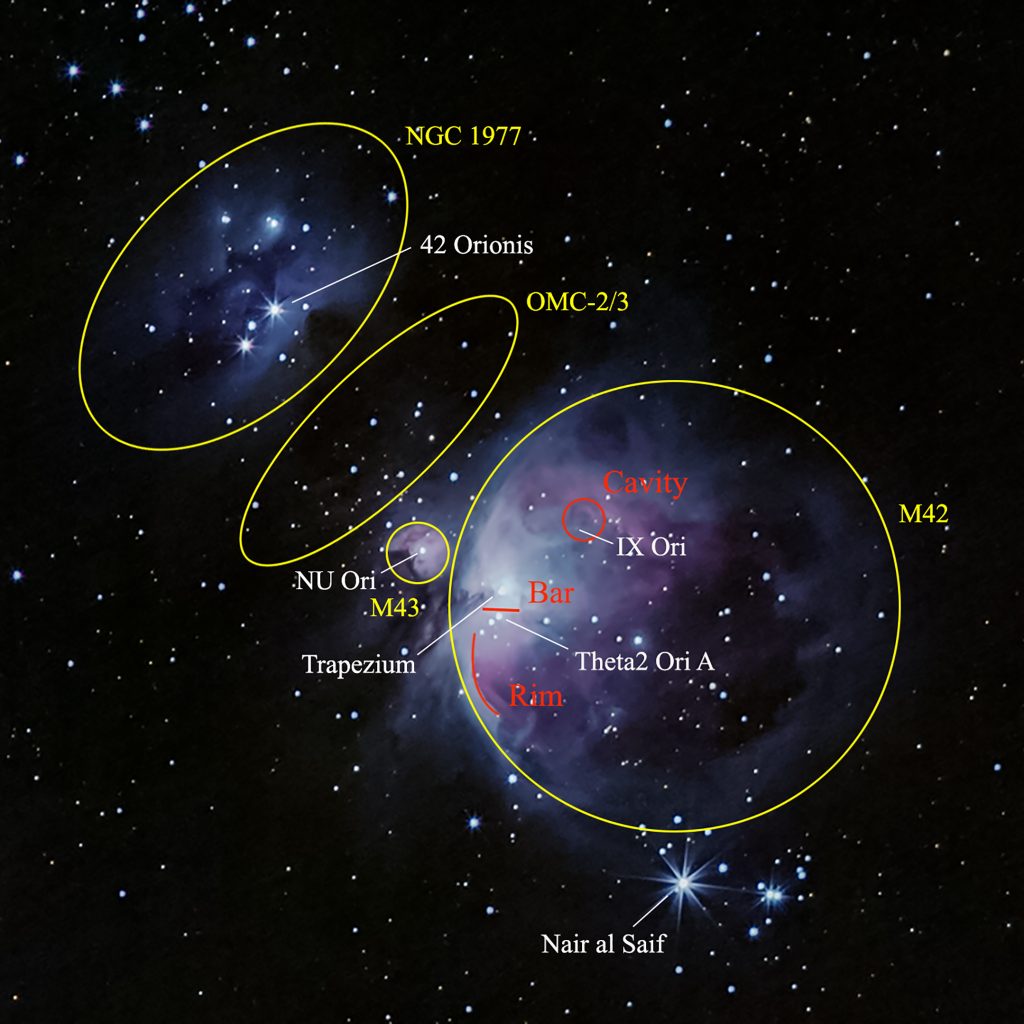 The Orion Nebula (M42) is a relatively bright object in the night sky and is one of the few emission nebula/HII regions that can be seen by the naked eye. In ancient times the Orion Nebula was most likely considered as a star like object. The first known drawing of the nebula itself was made by the Italian astronomer and Roman Catholic priest Giovanni Battista Hodierna in 1654. Hodierna’s work was totally ignored until recently and the discovery of the non-stellar nature of the Orion Nebula was credited to the Dutch scientist Christiaan Huygens.

The first photographic image of the nebula was made by the US amateur astronomer Henry Draper in 1880. The photographic emulsion Draper used had a quantum efficiency which was about 3000 times smaller compared to the sensors of modern DSLR cameras!

Today the Orion Nebula is one of the best studied celestial objects at all. The
nebula has been observed over the full wavelength range from radio waves to high energetic radiation.

The center of the Orion Nebula is formed by the Trapezium. In smaller telescopes four stars can be identified in the Trapezium. Larger telescopes can resolve several more components. The brightest star in the Trapezium is the young and hot O-type star Theta-1-Ori C. In some distance to the Trapezium is another ultra-luminous O-type star, Theta-2-Ori A. These two stars are shaping the large scale structure of the Orion Nebula with their intense radiation. One has to imagine the nebula as a thin, blister like structure of hot ionized gas on the surface of a giant molecular cloud.

Another prominent structure in the emission nebula is the Orion Bar. The Bar is a bright ionization front where the radiation from Theta-1-Ori C destroys the parent molecular cloud and steadily increases the size of the emission nebula. The Bar is so bright that it can clearly be seen in the first photographic image of the nebula made by Henry Draper.

The picture of the Orion Nebula shows mainly red and blue colored, cloud like structures. The Orion Nebula is an emission region/HII region where the radiation from the luminous O-type stars is constantly ionizing hydrogen atoms. The ionized hydrogen atoms are recombining with free electrons inside the nebula. In this process H-alpha photons are produced which
are responsible for the red color of the nebula. The blue and green color in the image is mainly due to another hydrogen recombination line (H-beta) and due to light emitted by doubly ionized oxygen ions. The oxygen ions constantly collide with the free, fast electrons inside the HII region and emit photons in the blue/green spectral range. In addition small dust grains in the emission region will scatter blue light from the bright stars into the direction of the observer.

Separated by a dust band is a second, smaller HII region called M43. The gas in M43 is excited by the B-type star NU Ori which is located in the center of M43. OMC-2/3 is another star-forming region and part of the Giant Molecular Cloud A. This region is missing luminous O-type stars and we can therefore only see the young stars. NGC 1977 is a famous reflection nebula and also a member of Orion’s molecular cloud. In a reflection nebula the light from the stars, here mainly from 42 Orionis, is scattered by small dust particles towards the observer. This results in the blue light of the nebula. In an emission nebula like M42 or M43, the blue and red light is emitted by the hot gas itself.

The Orion Nebula is a highly dynamic object. Star formation, especially the formation of massive stars, is a very violent process. The massive stars radiate enormous amounts of energy, they have strong particle winds, they have jets and outflows, ionization fronts are steadily moving in all directions into the parent molecular cloud and some stars may even explode in a supernova event. This results in a complex spatial structure with many cavity and rim like features.