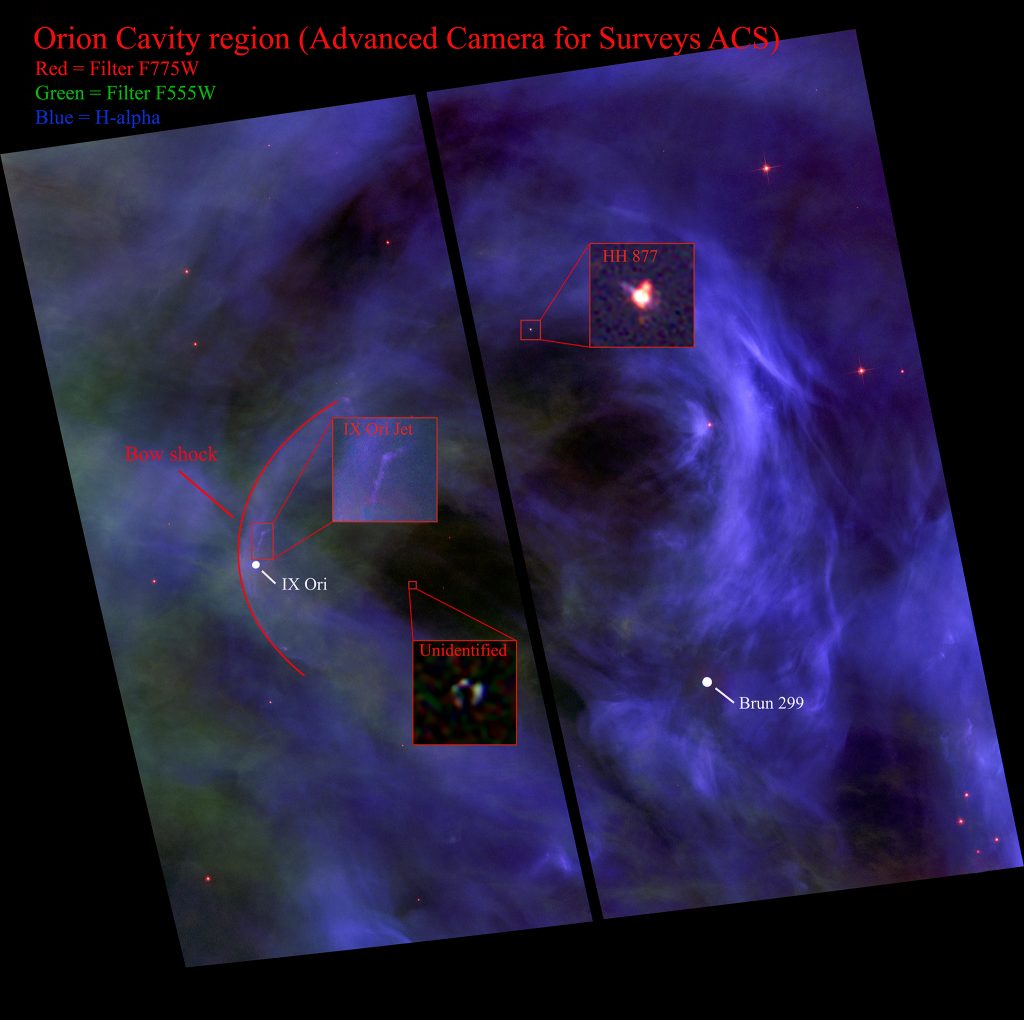 The Orion Cavity region observed with the Advanced Camera for Surveys (ACS). Based on observations made with the NASA/ESA Hubble Space Telescope and obtained from the Hubble Legacy Archive, which is a collaboration between the Space Telescope Science Institute (STSCI, NASA), the Space Telescope European Coordinating Facility (ST-ECF/ESA) and the Canadian Astronomy Data Centre (CADC/NRC/CSA).

The Orion Cavity region is not as extensively studied in the scientific literature compared to the Orion Bar or the BN Object region. The name Orion Cavity region is also my personal naming. The region shows a relatively high degree of symmetry and has a resemblance with a cavity like structure. This symmetry could be due to some central object. In the image a central object is however not visible. So either a central object does not exist at all or is deeply embedded inside the molecular cloud.

The region is dominated by H-alpha emission (blue color). Most stars in
this area are relatively cool and have a red color. The best studied object in the picture is IX Ori. This young star is a member of the Orion Cluster. It has a one sided, curved jet pointing northward. Directly to the east of IX Ori is a bow shock like structure. This structure is normally interpreted as interaction between outflowing material from the young star and gas flows originating in the core of the Orion Nebula.

Somewhat east of IX Ori is a small object which I could not identify in any star catalog. This is a typical example for a tiny object in a HST picture where it is not obvious if it is an instrument artifact or an astrophysical object. The object looks like a ring structure which is broken into four segments. This could be a gravitational lens. A gravitational lens is a distribution of matter (for example a galaxy or a black hole) which bends the light of a bright, distant source (for example a supernova) into the direction of the observer. If the lens, the distant source and the observer are perfectly aligned, the result is a ring like structure. If the alignment is not perfect,
the result is a segmented ring like structure. The other possibility is that this object is simply the result of an instrument artifact. The pictures made with the ACS camera are overlapping. If this object is real, it should be found in both overlapping pictures. This is however not the case. In summary it seems more likely that this object is an instrument artifact due to an error on the ACS sensor. 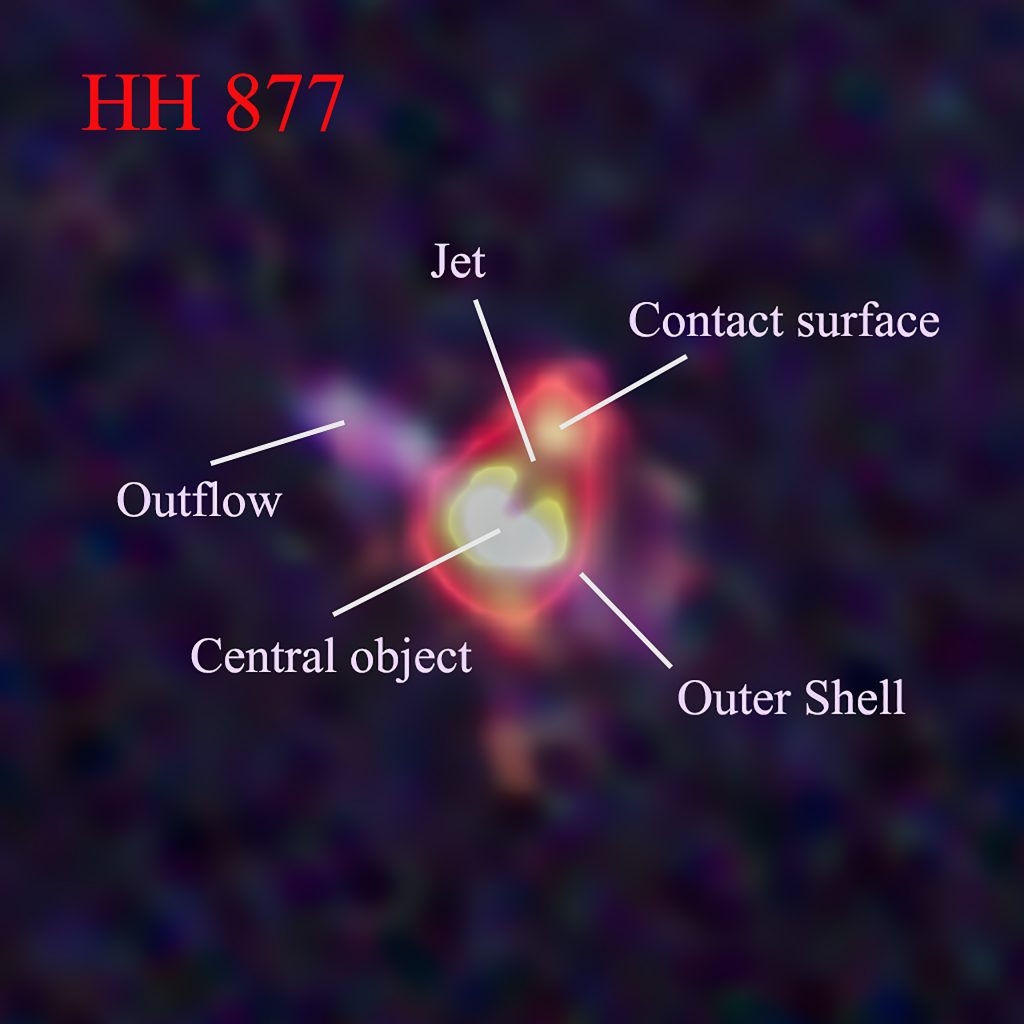 The Herbig-Haro object HH 877 observed with the Advanced Camera for Surveys (ACS). The contrast was enhanced in Photoshop to study the substructure of HH 877 in more detail. Based on observations made with the NASA/ESA Hubble Space Telescope and obtained from the Hubble Legacy Archive, which is a collaboration between the Space Telescope Science Institute (STSCI, NASA), the Space Telescope European Coordinating Facility (ST-ECF/ESA) and the Canadian Astronomy Data Centre (CADC/NRC/CSA).

The object HH 877 is an already known Herbig-Haro object. I have not found any scientific publication where HH 877 is discussed in more detail. The following discussion is therefore my own interpretation. In the picture above a central object can be identified which is embedded in a thin shell. There are also two outflows/jets visible. Is HH 877 a photoevaporating proplyd? I don’t think so because there is no nearby O-type star which could initiate a photo-evaporative flow. In addition the outer shell is not bright in H-alpha emission which would be typical for a photoevaporating proplyd. I think the central object is most likely a very young star with a disk which is still embedded in relatively cool gas. There seems to be a contact surface where a jet, originating from the central object, is interacting with the outer shell. A second outflow/jet is pointing in a different direction. The central object has a somewhat smaller size in the H-alpha filter (blue color) compared to the other two ACS filters (green and red color). This results in the yellow line (green + red = yellow) which can be seen in the  picture above. Interestingly the central object, presumably a disk, is seen in emission in all three ACS filters. It is not clear if this is due to external radiation coming from the Trapezium stars or due to an internal excitation mechanism.